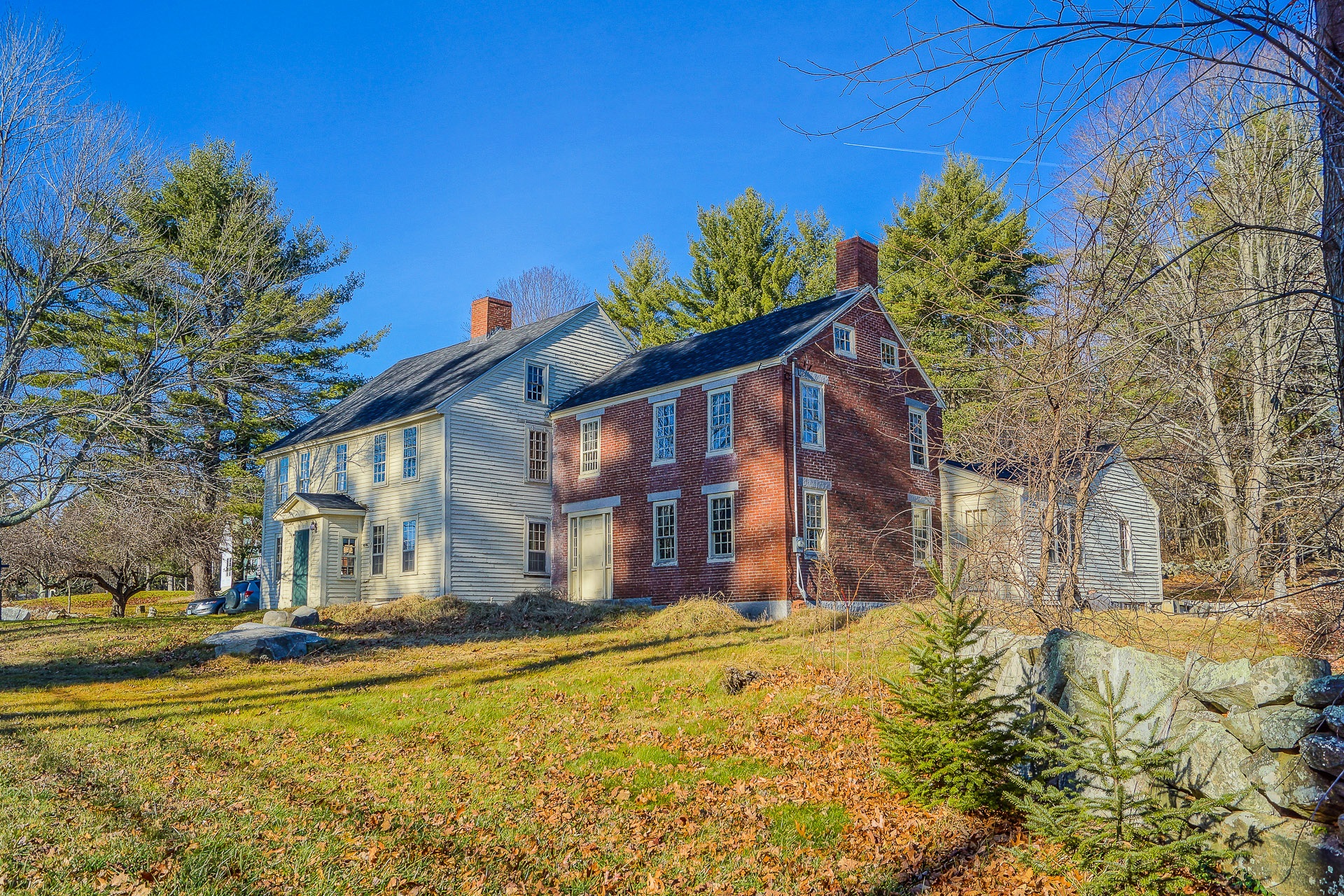 Mostly known as the old Obadiah Duston place, this antique colonial has 500+ feet frontage on the lake. The original property was built in 1730 and expanded in 1840, true to the frugal spirit of the times the house was built with material at hand: granite, brick and wood. 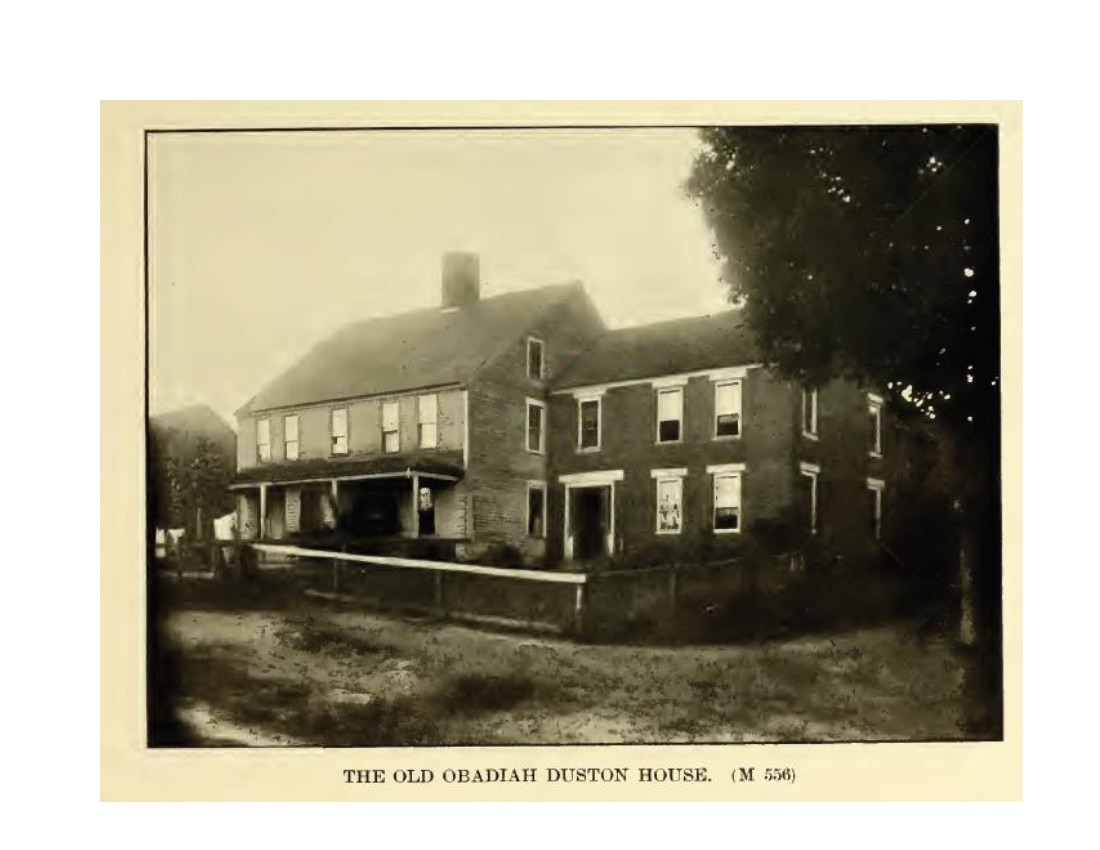 Ted Whitman restored the property in the 1980-s and had a barn built by master craftsman and "joiner" Bill Rhoads of Candia Frame Co in 1986. The first floor was later converted into a two car garage, but the upstairs is untouched and displays the old time post-and-beam techniques. 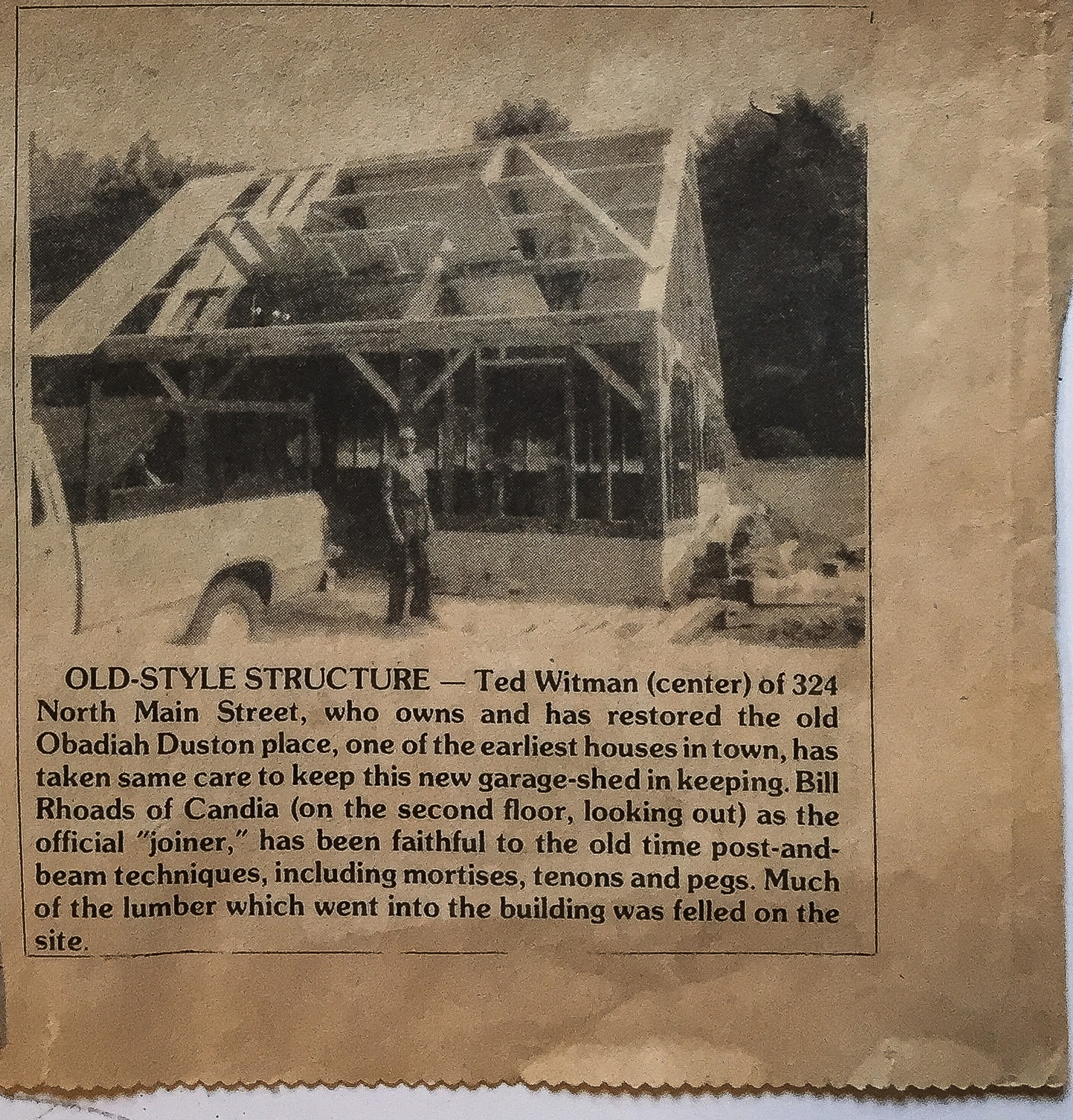 OLD-STYLE STRUCTURE - Ted Witman (center) of 324 North Main Street, who owns and has restored the old Obadiah Duston Place, one of the earliest houses in town, has taken same care to keep this new garage-shed in keeping. Bill Rhoads of Candia (on the second floor, looking out) as the official "joiner", has been faithful to the old time post-and-beam techniques, including mortises, tenons and pegs. Much of the lumber which went into the building was felled on the site. 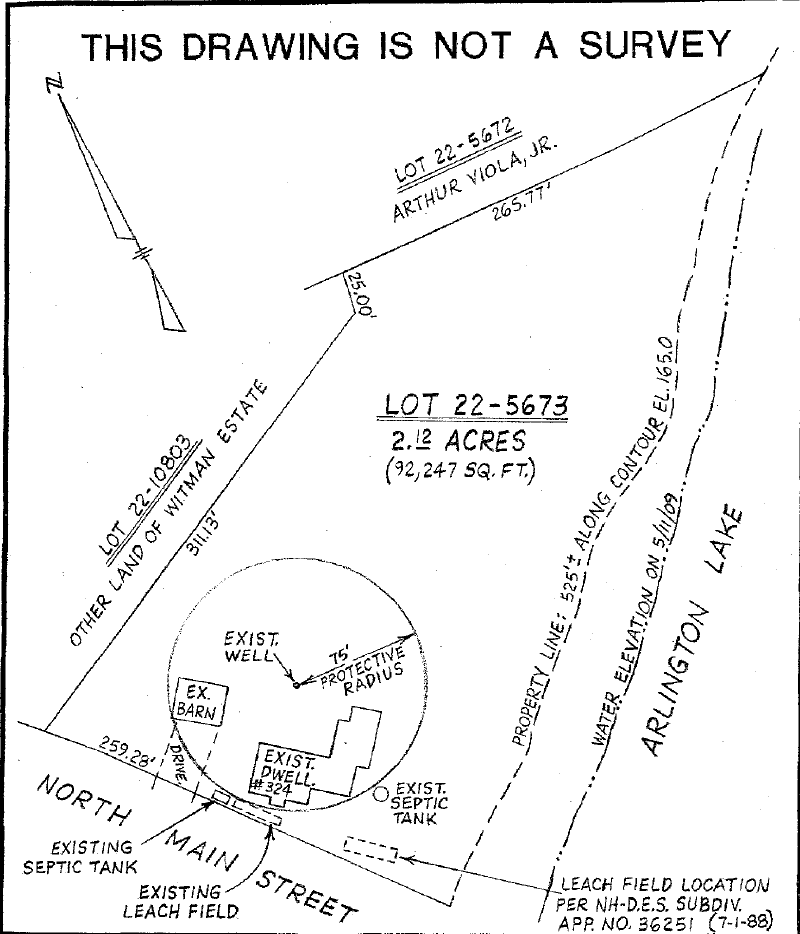 The gently rolling land provides a beautiful setting for this antique home. Maple trees line the gorgeous rock wall, that runs at an angle with the shoreline on Arlington Pond.

Although this section of the pond is not large enough for power boats, it is a great spot for enjoying nature and fishing. It's only a short walk to the Dockside Marina at 321 N. Main St, with a boat ramp on to Arlington Pond and plenty of facilities for boating.

As a group, the collection of First Period dwellings illustrates patterns reflecting both an evolution over time and, by the first quarter of the eighteenth century, the transition in the vernacular from the First Period to Georgian concepts of architecture.

Examples of the most common two-room, central-chimney plan can be found in both early seventeenth century East Anglia and in First Period Massachusetts Bay dwellings. This plan, in fact, has survived for 350 years and today is still found in the Cape Cod house and other “colonial” designs. English precedents can be identified for First Period frame construction, roof design, and, to a large extent, the use of materials and decorative features. 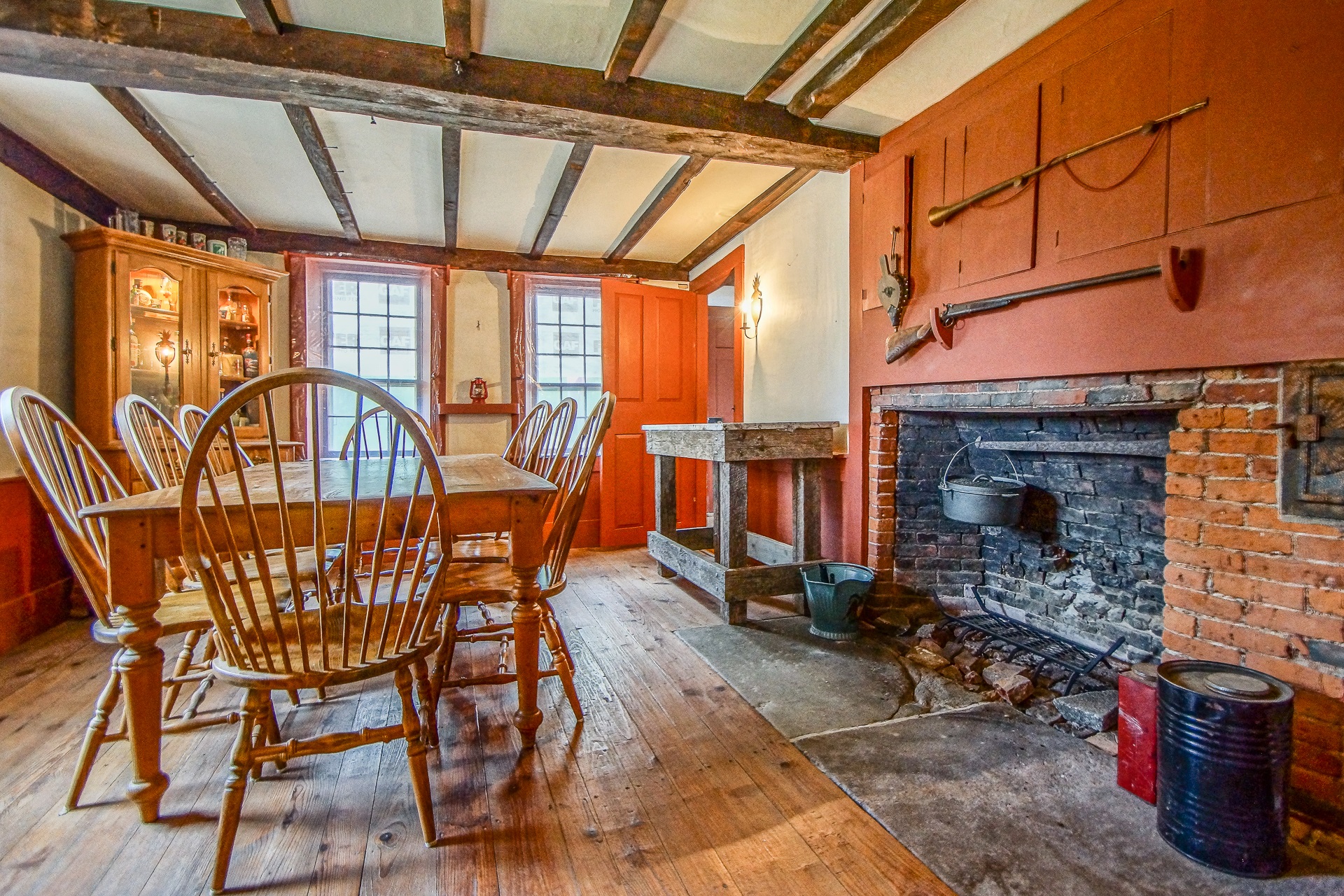 Scarcity of lime for mortar, too, made timber the preferred building material. Trends have been identified for decorative treatments as well, although in this case, many of these trends are regional as well as having English precedents. The evidence of one carpenter in certain areas and the connection with a specific region in England has been traced, as have the changes that evolved as carpenters and house wrights adapted to different conditions.

The identification of specific patterns of countywide building preferences and, especially, the large number of later First Period houses is important for increasing the understanding of craftsmanship in late seventeenth and early eighteenth century New England. For example, the use of a transverse summer beam supported by a post with a decorated carved shoulder, rather than the longitudinal summer beam is a feature that was concentrated in Essex County in and around Salem. 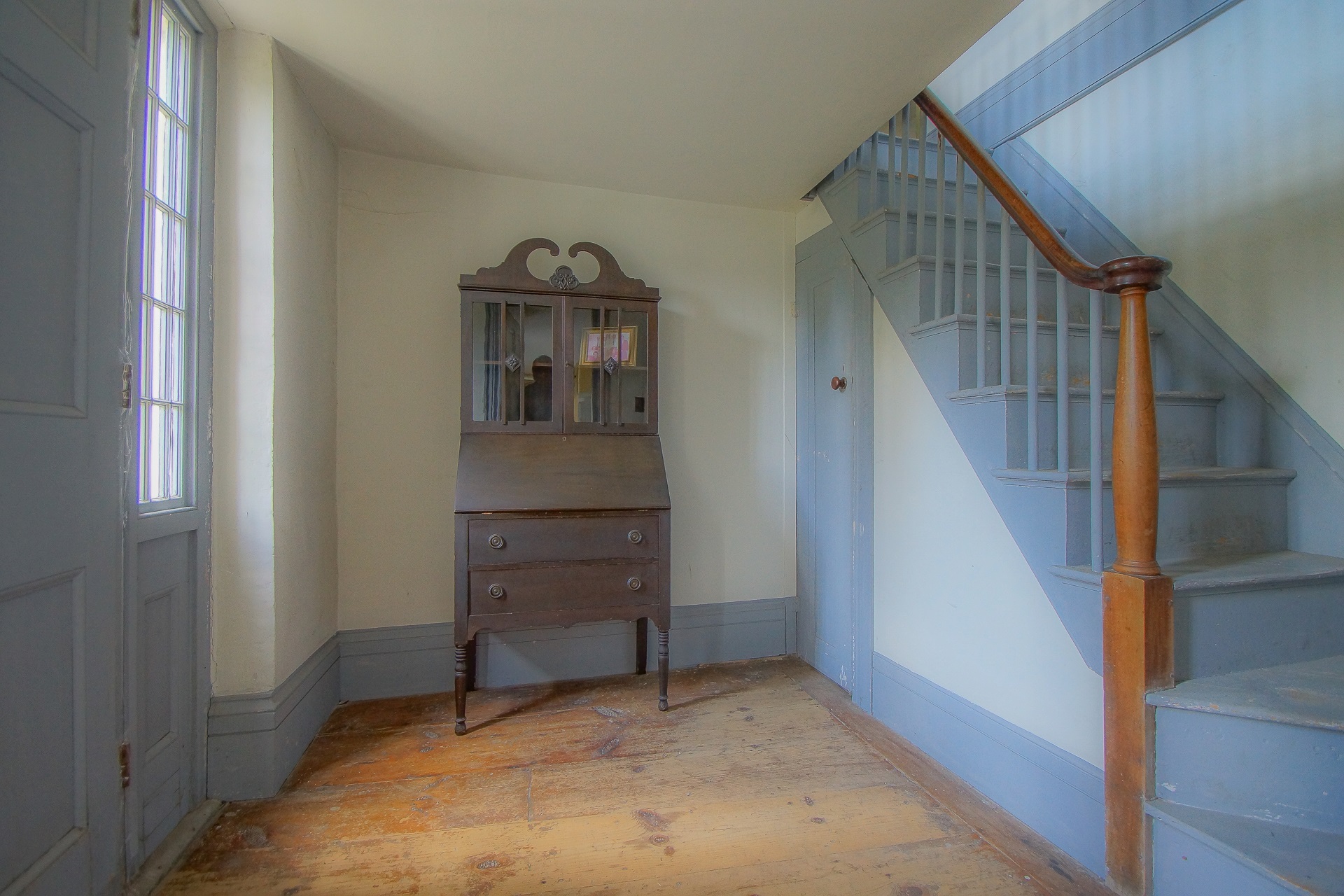 The current interior of the this home reflects the ongoing nature of antique restoration. Although previous generations of owners have taken great care to preserve this historic property, more effort is needed to fully restore it to its former glory.

In 1909, the Arlington Mills of Lawrence, Massachusetts began to search for an additional water supply to help drive the generators at the mill during the summer months when water was scarce. They surveyed the Wheeler Mill Privilege located on Old North Salem Road in North Salem. Wheeler Mill was not operational due to a fire. Nearby were fifty residential homes, an electric company, a sanitarium and Wheeler Dam with a ten acre pond that held 19 million gallons of water. Water flowed into the lake from Big Island Pond in Derry, NH and out into the Spicket River, which flowed by the mills. They purchased the properties in 1919 to insure the looms at the mill would be working year round.

In 1920, the work began. The buildings were torn down, hauled away and the trees cut. The timber, one million feet in all, was used for railroad ties at the mill for framing of the dam and for making 900,000 box boards for the mill. By May 3, 1923, the project was complete and the reservoir filled. It held one billion gallons of water and covered 260 acres. Part of the Old North Salem Road is still under water to this day, as well as partial structures of the mill buildings. The dam was 48 feet high with 550 feet of concrete cored dike.